This is the story of “A store”, “That store” and “THIS store”. It is filled with many historical facts, most of which are actually true, the rest of which will now be considered true, true-ish or at the very least, ‘true enough”. Some details have been edited for time, and some names omitted to prevent us from giving any more money to lawyers or animal trainers.

Once upon a time, there was “A Store” in West Boca, on 441. It was owned by a very nice person, who is still our friend today. In 1990 this fine comic shop owner hired Johnny Miller 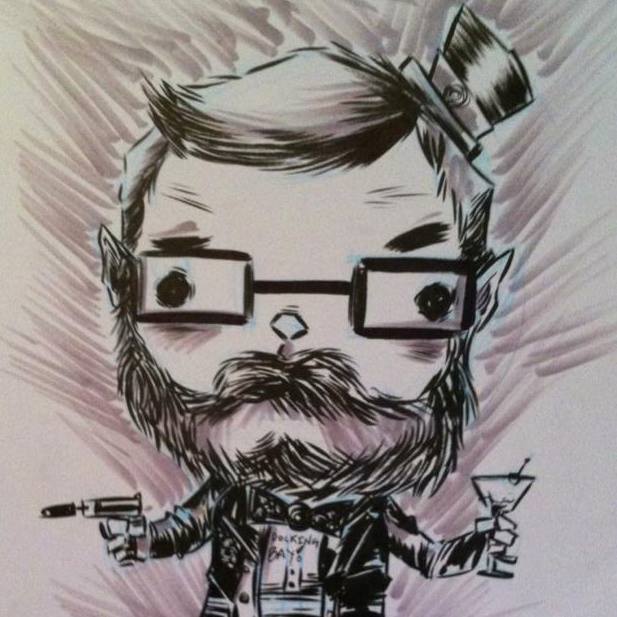 to be his employee and eventual manager. It was a wonderful time to be in a comic & games store. So much so, that when the opportunity presented itself in 1998 for Mr. Miller to purchase “A Store” from his boss, he did. He renamed “That Store”. He owned and operated That Store as his own Realm, for many years. The exact name of that Realm has been Lost to our memories, West Boca is a strange and mystical place. Even the existence of West Boca is sometimes disputed.

In this time John Bontempo befriended Johnny Miller. It is unknown exactly when he became a regular fixture at That Store. All comic shops have someone like him. An older guy that doesn’t really work there, but always seems to be there. Perhaps he was always there, even before the dawn of time. He has been known by many names of the years, Odin, The Admiral, The Old Man. We are only sure of a few things; he is not Miller’s father, He is not actually a store owner (but he gets treated like one), and no one is more loyal to Johnny Miller and his shop.

Then one day in June of 2006 , at the urging of Odin, “That Store”, the Realm whose name was Lost, closed. Coincidentally, and COMPLETELY unrelated to that, THIS store, Docking Bay 94 Comics and Games, opened at its present location at 7710 NW 56th Way in Coconut Creek, FL. This was the opening of an entirely different store, in an entirely different county, in the same week, with the same staff, owner, regulars and old man. Any stories of THAT store and THIS store being in anyway corporately related are staunchly denied, and not entirely believed. The rent was fair, the landlord was nice & the roof didn’t leak. (Our lawyers would like to point out that we never actually said those three things were untrue at the old location. We are just affirming they ARE true in the new location. (wink wink) Things were good in the new location – for a time.

When the recession hit, times were tough for a lot of business. But Miller is a survivor. In January of 2010 he asked his friend, Frank Edwards 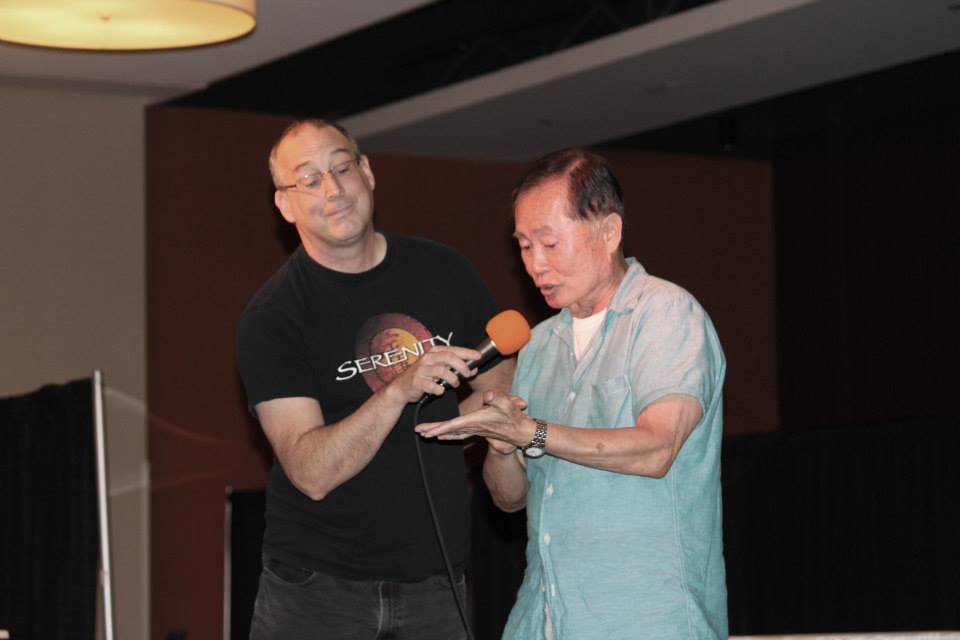 , who owned the only recession proof business Miller had ever seen, to come in as a partner. Frank, a self admitted ‘math geek’, & gamer looked over ‘the numbers’. It’s what he’s good at. Frank re-negotiated some terms with distributors, the landlord, merchant services and other vendors, and then got BD94 a far better deal with a different bank. In 6 months we went from owing back taxes, to having the tax collector play D&D in the store with us. The stage was set for a comeback.

In june of 2011 Jonathan Rukes 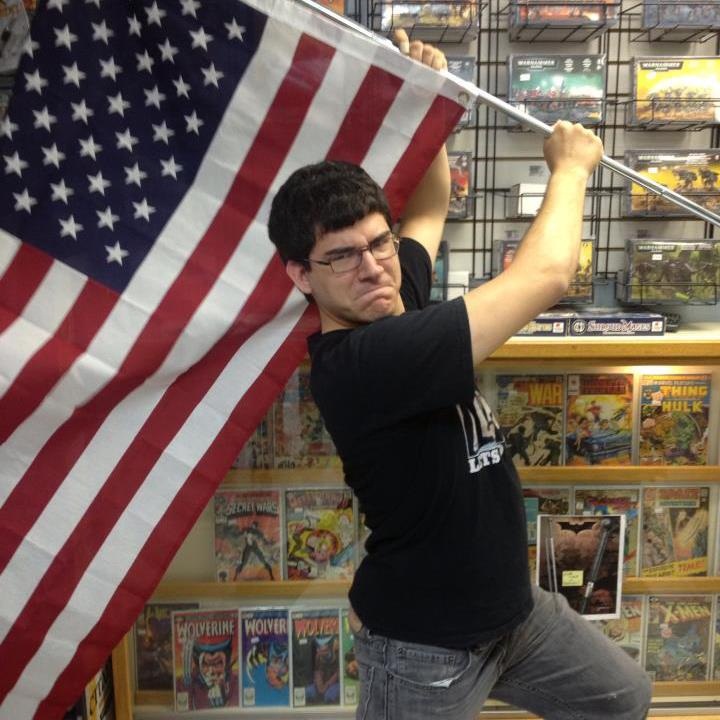 joined the team. Thus necessitating we get REAL specific as to who was called John, Johnny, & Jonathan. His expertise in comics is impressive but it was the gaming department that he really ramped up. He had already been a player in the store for years, so he knew what players wanted. When he's not busy with the gaming, Jonathan loves to read and recommend indie comics, as well as add to his ever-growing statue collection. Jonathan is also the one responsible for making the event fliers that get stuffed in your shopping bags.

In the summer of 2012, business had grown to the point that it was decided that yet another team member was needed. Interviews were held and Luis Magno Faria 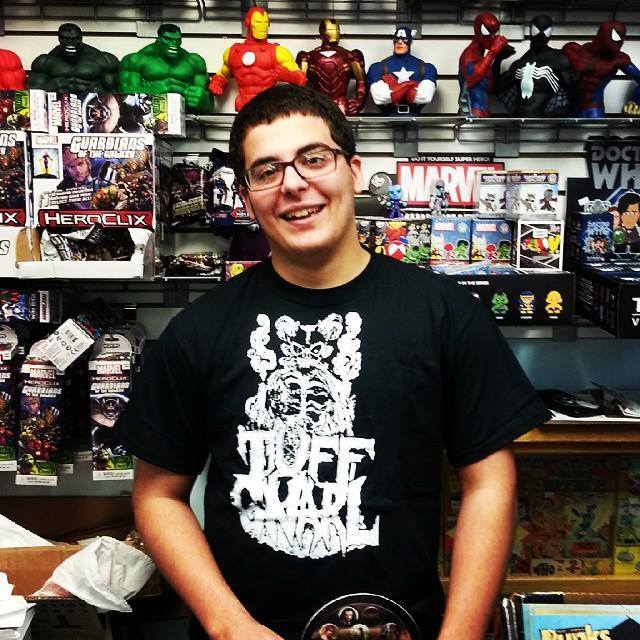 joined the team. He knows comics, he knows gaming, but when you get him talking about toys & collectables – watch out! Luis was able to "live the dream" when he sold a portion of his comic collection to put a down payment on a new car. He is aslo responsible for creating this site!

So now we had experts in comics, gaming, toys, SciFi collectables, AND accounting. Now the store not only could stay open longer hours, the foot traffic demanded it. This combo of Jonathan & Luis, under the tutelage of Johnny Miller, (and some back seat driving by Frank) is what made so much more possible for Docking Bay Comics and why it is so successful today.

2016 was a banner year for Docking Bay 94.In the fall of 2016,after discussions between Johnny and Frank,they decided Docking Bay 94 would buy out Frank's loan. Docking Bay 94 appreciates Frank's input and help along the way, and wish him well on all of his future endeavors!

We are proud to be your, “Little shop under the billboards.” Come hang out with us.